What is the 15 minute city initiative?

The 15-minute city is defined by its ability to provide access to all human needs by walking or bicycling for a quarter hour or less.

In general this is not how planners have designed our cities. They have put together a business section, there is a housing section, and then entertainment outside the main city. People have to travel from one section to the next in order to access their needs.  Those without cars or who can’t afford to travel are immediately disadvantaged. Forcing people to travel increases pollution from traffic. Time is spent commuting, so less time is spent with family and hobbies and this decreases well being.

The motor car has has its day. It is now contributing to the decrease in well being and health of both people and the planet. 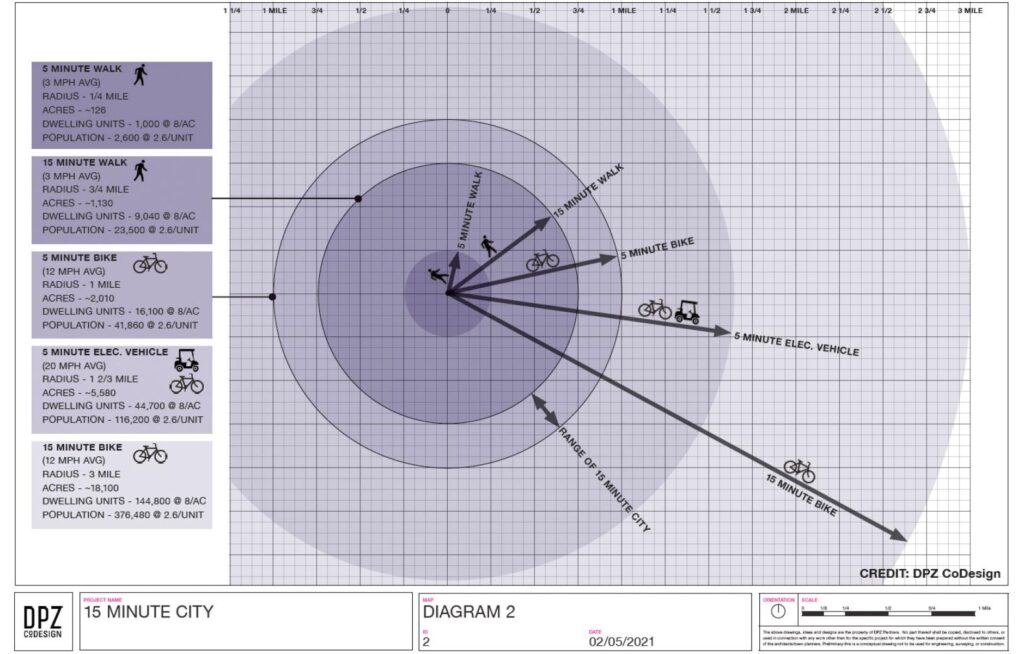 1. Amsterdam – a large city of bikes

Due to post war city planning to prioritise the car, streets of Amsterdam were no longer a place for the people who lived there, but a place for cars, carbon emissions, and huge traffic flows. It wasn’t until the 1970s that the city began investing in cycling infrastructure due to the unacceptably high death rates of cyclists and pedestrians. In 1971 alone, it was reported that 3000 people were killed by cars, 450 being children.

After protests consisting of residents biking up and down streets and cycling to the house of the prime minister, Joop den Uyl, the Dutch government decided to financially support Stop de Kindermoord, subsidizing the organization and collaborating with them to develop safer urban planning initiatives.

Forty years of urban planning and policy work led to the Amsterdam of today. Although it didn’t happen overnight, the demand from residents and the active leadership of the Dutch government led to a civic and government collaboration that turned a car-loving city into a world-leading example in bike infrastructure for other cities to follow.

2. Guernsey – an tiny island of cars

The island of Guernsey (and indeed Alderney, Sark and Herm) could easily be a “15 minute city” in theory because everything is within a short distance.

However, we have more cars than the population and thus congestion on our roads.

Back in 2016, the states were discussing how to reduce car emissions. Here is an extract from an article about a new tax that was meant to decrease car emissions.

The tax rate will depend on the vehicle’s carbon dioxide emissions, and owners will pay it when they register their vehicle in Guernsey. The Environment Department said the tax would fund transport reforms. The States of Guernsey voted in 2014 to spend £4m a year on measures to reduce car use.

This didn’t work and things have only got worse since then.

Source for photo and article.

Why, therefore, on a small island 12 x 5 miles, are people not in the mindset of finding an alternative way of getting around that does not involve a car?

In recent transport surveys some schools have 70%+ of school children travel  by car and despite active transport initiatives this is not falling. We even have a cheap bus transport system with regular services around the island. In the far reaches of the island there are still hourly buses. It is hilly which may put people off cycling, but it is good to see an increasing number of electric bikes, including seats for children, on the roads. Evie bikes offer an option of use for short journeys without the need to buy an expensive electric bike. It is also easy to walk everywhere.

Data from a survey in July 2021 stated, in total nearly one million journeys to and from town (St Peter Port) by cars, buses, bicycles and lorries were recorded by automated traffic counters over a single week. Out of the 15 locations studied, Glategny Esplanade had the heaviest traffic, with nearly 138,000 journeys – an average of 21,000 on weekdays – and an average speed of 23.3mph. Source for photo and information

Cutting down on car journeys is an instant, huge gain towards the net zero target.

What will it take to get people out of their cars?

Shame on you Guernsey – if a big city like Amsterdam can do it – why can’t you!